The Exercise Research Behind Peloton’s Success

The Science of Change is a new podcast hosted by behavioral scientist and co-founder of Irrational Labs, Kristen Berman. On this show, Kristen chats with visionary product and organizational leaders to uncover their insights about user behavior — and how they’ve managed to change it. For listeners who want a deeper dive into the behavioral science behind each episode, we’ve compiled and summarized the most relevant research here.

Haven’t heard the Peloton episode on our new podcast, The Science of Change? Listen here and don’t forget to review us!

How long does it take to form an exercise habit?

Surprisingly, there’s not a whole lot of data on this out there. The best study we have is a longitudinal study of gym habit formation in Canada. They find that exercise habits mostly formed after working out at least 4 times a week for 6 weeks. However, they measured habits using self-reported (not actual) behavioral automaticity (for example “when I exercise, I do it automatically,” on a 1-5 scale).

(Perceived) action complexity influenced the speed of habit formation: exercise routines that felt simpler turned into habits faster than those that felt complicated. But note that this study didn’t objectively evaluate routines, it just asked people to report how effortful the routine felt.

The 6-week estimate is fairly close to what another study found: a median time to achieve habit formation was about 9 weeks (66 days). This second study looked at a number of health behaviors (such as drinking a glass of water with breakfast) and not just exercise. Accordingly, there was considerable variability, and researchers found that habit formation thresholds ranged anywhere from 18 days to 254(!).

In any case, both of these estimates are way longer than the conventional wisdom of “21 days to form a habit.” Fun anecdote: The 21-day rule of thumb started from Maxwell Maltz, a plastic surgeon who wrote a self-help book in the 1960’s. He noted that people take at least 21 days after plastic surgery to get used to their new face. Decades later, a game of telephone transformed this observation into a supposed law of habit.

Should you try to always work out at the same time/place?

Based on what we know about habits, to form a habit, you want to repeat an action at a consistent setting. For example, you might aim to exercise first thing in the morning, or right after work. This approach, habit stacking, should presumably yield stronger habits compared with working out at random times. We assume this is true because there’s significant evidence demonstrating the role of consistency in habit, but comparatively less good data about exercise specifically.

What has an impact on a person’s exercise habits? The real habit to focus on might be preparing to exercise

Exercise is a complex behavior—it involves multiple steps. For example, to go to the gym, you might first need to:  1) Put on your gym clothes, 2) Gather a second set of clothes, 3) Pack this second set of clothes in a gym bag, 4) Walk to a bus station, 5) Ride the bus, and 6) Get off and then walk to the gym. Each additional step on the way to a behavior poses another opportunity for drop off.

This study measured gym patrons’ habit strength for (a) prepping to exercise, and (b) exercising, and then measured their actual exercise 6 weeks later (self-reported, but using the Godin scale, which has been validated against objective measures before). They found that strong preparation habits predicted higher levels of exercise, but performance habits did not.

These findings are key to solving a basic dilemma in exercise: Should you keep workouts the same (to foster habit formation), or should you constantly change things up (to keep things interesting and stoke intrinsic motivation)?

Based on this research, the secret might be in automating the initiation but varying the workout. This is especially relevant to home workouts, since, unlike traditional workouts where varying might require some thinking, home workouts could vary the type of workout presented to a user without requiring extra effort from the user.

Do habits break when you miss a day or two?

Not really. One of the studies mentioned above had participants track the performance and perceived automaticity of a new health behavior over several months. Missing a single day (but returning to perform the behavior the following day) did not influence habit formation.

This contradicts the streak-based “don’t break the chain” concept that permeates a ton of so-called habit formation apps: Given that missed days don’t seem to harm habit formation, striving for perfect adherence might backfire by producing a “what the hell” effect, where a single missed day causes further non-adherence (see some examples in diet).

Longer breaks, on the other hand, might have a detrimental effect on habit formation. For example, this study of Danish fitness centers found that gym attendance fell from about 2 times a week on average before Easter break, to about 1.7 times a week after. Their data showed no rebounding effect with time: Weekly gym visits actually continue to decline in the 10 weeks following Easter, down to 1.3 times a week. Worryingly, the harmful effects of Easter break were much more pronounced for people with strong habits (those who went to the gym at least twice a week before the holiday).

Why can some people always get out of bed and go on a run?

They have a stronger habit. This means if one day their intentions are weaker, their habit drive will override. For most of us without strong habit—if we have low intentions to work out, we just won’t. “On days when people had intentions that were weaker than typical for them, habit strength was positively related to physical activity, but on days when people had typical or stronger intentions than was typical for them, habit strength was unrelated to daily physical activity.”

This Vox article does a great job of presenting the evidence for this argument. I like the graphic that they include (below), illustrating that two margaritas can undo even an intense workout (burning 700 calories).

Diet alone seems to be more effective than exercise alone, potentially because our bodies respond to exercise by burning fewer calories, offsetting the calories burned during a workout. This metabolic adaptation also happens in response to diet, but apparently not as much.

But even if you take the stance that exercise isn’t a good way to lose weight, exercise is still the cure for pretty much everything else (blood pressure, stress, improved mental health and mental functioning, etc.) This is a comprehensive review. 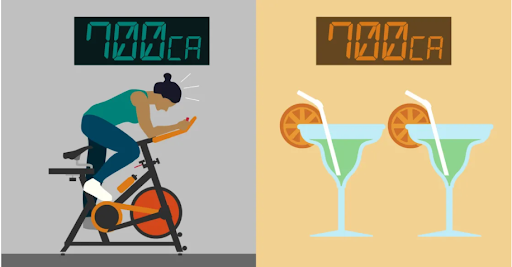 Want to dive deeper into the research discussed in the episode?