Revolving credit card debt declined during the COVID-19 pandemic, but has just begun to tick back up from 2020 lows.

For consumers juggling repayment across multiple cards, what’s the best approach to take when paying down debt? Because it can be more motivating to pay off a credit card account in full, consumers tend to repay debts with the smallest balance first so they can close accounts and feel a sense of progress (this is referred to as Debt Account Aversion, named because of consumers’ aversions to having lots of open debt accounts). The most rational approach would involve paying down the highest-interest debt first, as this approach minimizes interest paid. A recent paper by Hirshman and Sussman explores a new question: how do minimum payments influence consumers’ debt repayment strategies across multiple cards?

To test these hypotheses, they ran a series of four experiments. In all of the experiments, participants played a debt management game in which they were provided with the interest rates and amounts of six debt accounts of varying amounts. They were given a budget of $3,000 to dedicate to debt repayment (significantly less than the total of the debts), and had to select the amount they wanted to allocate to each debt. They played the game for three rounds, mimicking paying down credit cards over a three-month period.

In the first experiment, participants were randomly assigned to either a condition with minimum payments (and a $25 late fee) on all accounts or a no minimum payment control condition.

Participants in the minimum payment condition allocated their repayments in a more dispersed way, paid less money towards the highest interest rate debt, and ended up paying more money in interest. 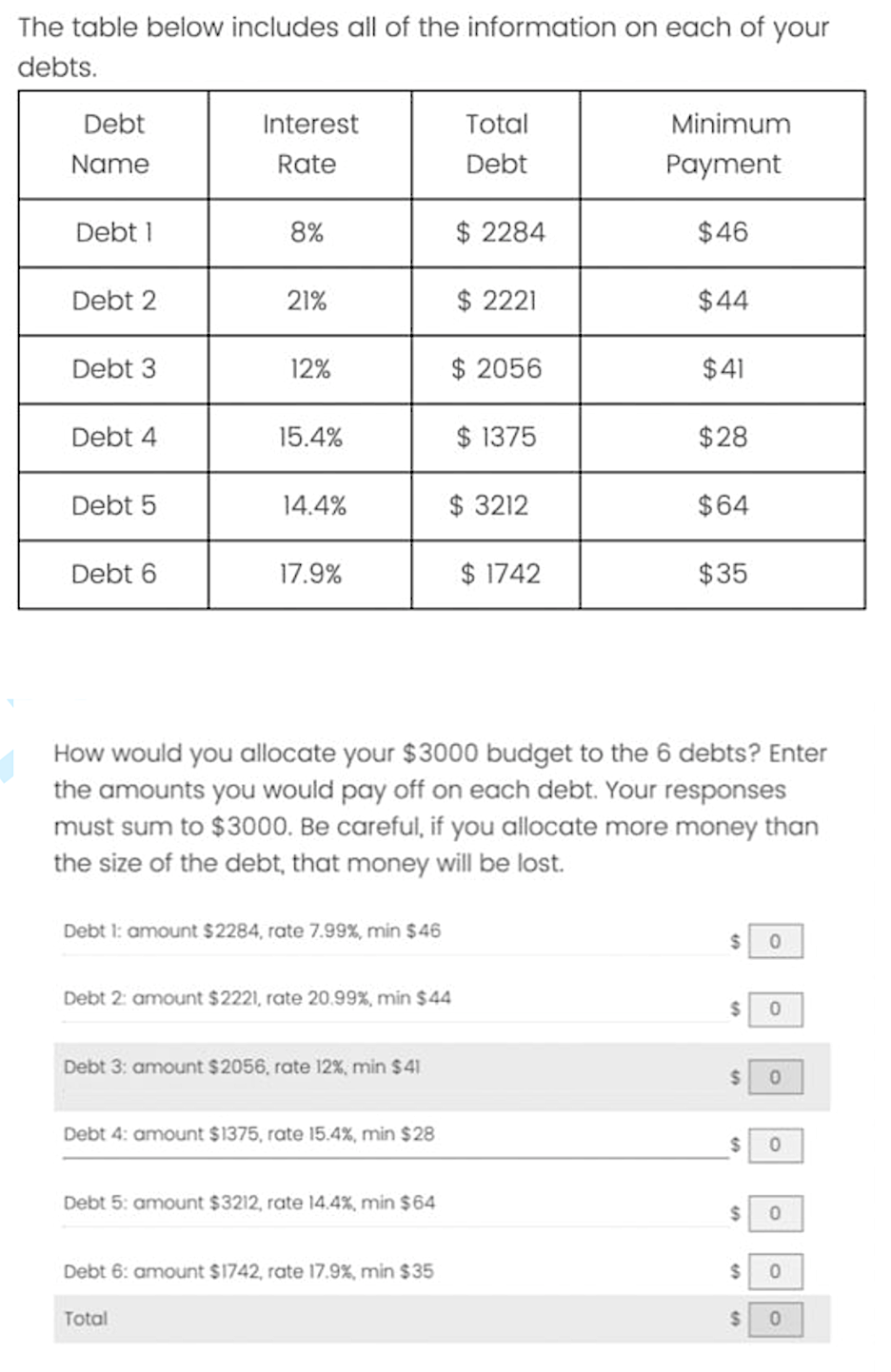 An example of Experiment 1’s interface

In experiment 1, participants were forced to allocate all $3,000 towards repaying debt. But experiment 2 gave participants in both conditions the opportunity to put some of their budget into a savings account.

The paper statement condition was most costly to participants. By introducing an additional perceived recommendation, the recommendation to pay off debts in full, the active choice condition performed best—significantly reducing the dispersion of payments, and increasing the amount allocated to the highest interest rate debt. The rest of the conditions performed in between these two.

Hirshman and Sussman demonstrated that minimum payments lead participants to spread their discretionary allocations across more accounts, and incur larger interest costs. They also demonstrated that the information displayed in the decision-making environment has the potential to either exacerbate or mitigate this effect. These findings point to some promising strategies to test in the field, particularly by debt account aggregators:

This work also highlights the importance of considering the fact that consumers are often juggling multiple debt accounts. Nudges targeted at increasing repayment on individual accounts may not be in consumers’ overall best interest, as it may lead them to incur additional interest costs.