How should we design savings accounts to encourage short-term saving?

This project is a part of Duke’s Common Cents Lab and is generously supported by MetLife Foundation. Common Cents Lab works to increase the financial health of low-to-moderate-income Americans.

As has been well documented by this and previous Common Cents Lab reports, the United States faces a saving crisis. An oft-quoted statistics from the Federal Reserve in 2013 suggests that, “42% of Americans can not cover an $1000 expense.”

A more recent report from the Federal Reserve suggests that, “lowering the savings target to $400 yields a depressingly similar statistic of 40%.”

One of our main focuses at the Common Cents Lab and Irrational Labs is to increase overall financial well-being. A crucial aspect of individual and collective financial well-being is saving money. e partnered with the Fintech company Narmi in an  attempt to encourage short-term savings and extend our understanding of how users think and feel about automating their bank accounts. Narmi provides clean and easy- to- use white label user interfaces for Credit Unions and Banks of all sizes.

Thanks to status quo bias, we prefer the current state of affairs, and moving away from the status quo seems like a loss. More likely than not, we’ll choose the path of least resistance when making a decision—the path with the least amount of friction associated with it. This is why defaults are so effective—they define the path of least resistance.

Defaulting individuals into automatic savings plans has been shown to be an extremely effective method for getting people to save for retirement.  In one study, defaulting new workers into a retirement plan increased the number of employees contributing to their retirement plans from approximately 60% to well over 95%.  Surprisingly, we have yet to see this same default savings mechanisms applied to short-term saving.

Having worked with invoicing startup Payable, we learned a few things about how people felt about automatic savings:

In order to test whether customers will realistically sign up for a new feature, a simulated experience can be deployed. This is called a “dry test.” In a dry test, the experience mimics what an actual enrollment may look like.

After the user has made their choice they are told it will be available in the future. A dry test is known to collect preferences that are more representative of the user’s actual behavior than a typical survey.

We designed a dry-test for Narmi that functioned as an in-app survey asking users which type of savings strategy they would prefer to sign up for. We provided four potential savings strategies, chosen because we hypothesized they would mitigate people’s fear of automatic savings. It was framed as if a real choice was being made but was, in fact, a hypothetical choice. 124 Narmi users opted in to our dry test.

Once users selected an option, they saw a screen notifying that these options were under development and the user would be notified when they became available. 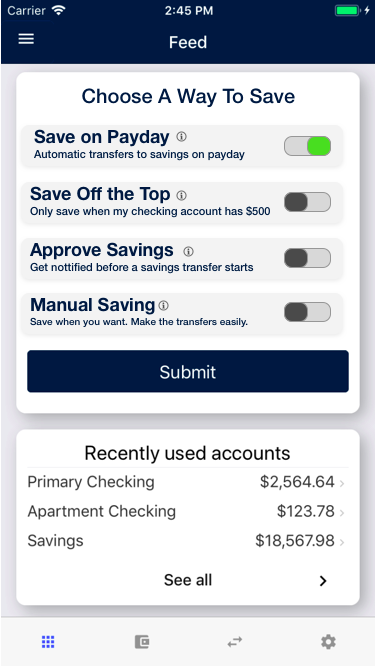 While the survey’s most commonly chosen answer was the traditional manual option (41.13%), that also indicates  that the majority of users (58.87%) wanted some type of “smarter” automatic savings option. Of these options, “Save on Payday” was the most popular with 28.24% of users choosing it.  “Approving Savings” (14.52%) and “Save Off The Top” (16.3%) were selected at relatively similar rates.

We observed that a preference for manual savings is strongly correlated with people who have been Narmi users for longer periods of time. In other words, the longer people have been a Narmi user, the more likely they were to select a manual savings option. Conversely, users who preferred “saving on payday” and “saving off the top,” were more likely to be newer users.

Finally, we observed a small but significant negative correlation between people who preferred manual savings and total deposit amount; people who had low deposit balances were more likely to select the “manual savings” option.  While correlational, these observations are in line with previous findings that suggest lower-net-worth users may be more reluctant to use automatic savings tools.

In 2020 Narmi launched a “save when you get paid” feature to all of their banks in an effort to trigger a one-time behavior aimed at consistently increasing savings.