This project is a part of Duke’s Common Cents Lab.  The Common Cents Lab is funded by the MetLife Foundation and supported by Blackrock as part of BlackRock’s Emergency Savings Initiative. This was first published in the 2017 Common Cents Lab Annual Report.  The project was co-led by Richard Mathera of the Irrational Labs team.

Credit card debt has ballooned in recent years, reaching more than $1 trillion for the first time since the Great Recession. According to NerdWallet’s 2017 household debt study, the average household that is carrying credit card debt owes over $15,000, which costs an average of $904 in interest annually. To help these households, we focused on creating an intervention that helps consumers to lower their interest on their credit card. We call it “Kill Bill.”

Building on these qualitative interviews, we ran a series of surveys with more than 5,000 people that delved into past experiences and outcomes with bill negotiations.

Through consolidation of these qualitative and quantitative insights, a few themes emerged:

1. Calling is the primary barrier to overcome. The most crucial step is calling the credit card company. Once participants got on the phone, their likelihood of continuing to complete the task was very high. But, people are busy. It seemed like there is never a good time to call your credit card company.

2. Success with lowering APR is not related to negotiation skills. Contrary to much of the financial advice and guides which highlight the importance of negotiation skills, we found that success with getting a lower interest rate was just asking and waiting through the hold. 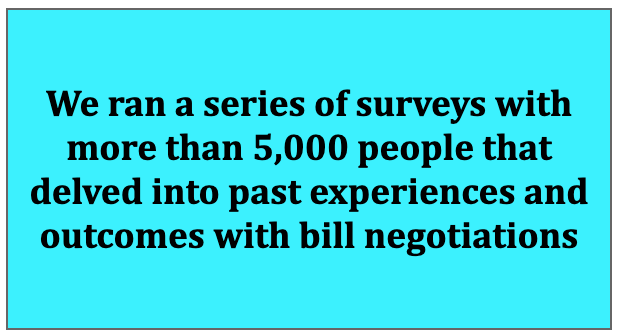 Based on our data and observations, we created a basic prototype of a product that would advise people to call and lower their credit card interest rate. Then we ran a seven-condition experiment on Google AdWords to test different messaging content that would motivate someone to call the phone number that was listed. When individuals called the phone number listed, they would be directed to a voicemail which gave them instructions on how to find the right phone number to call and why. 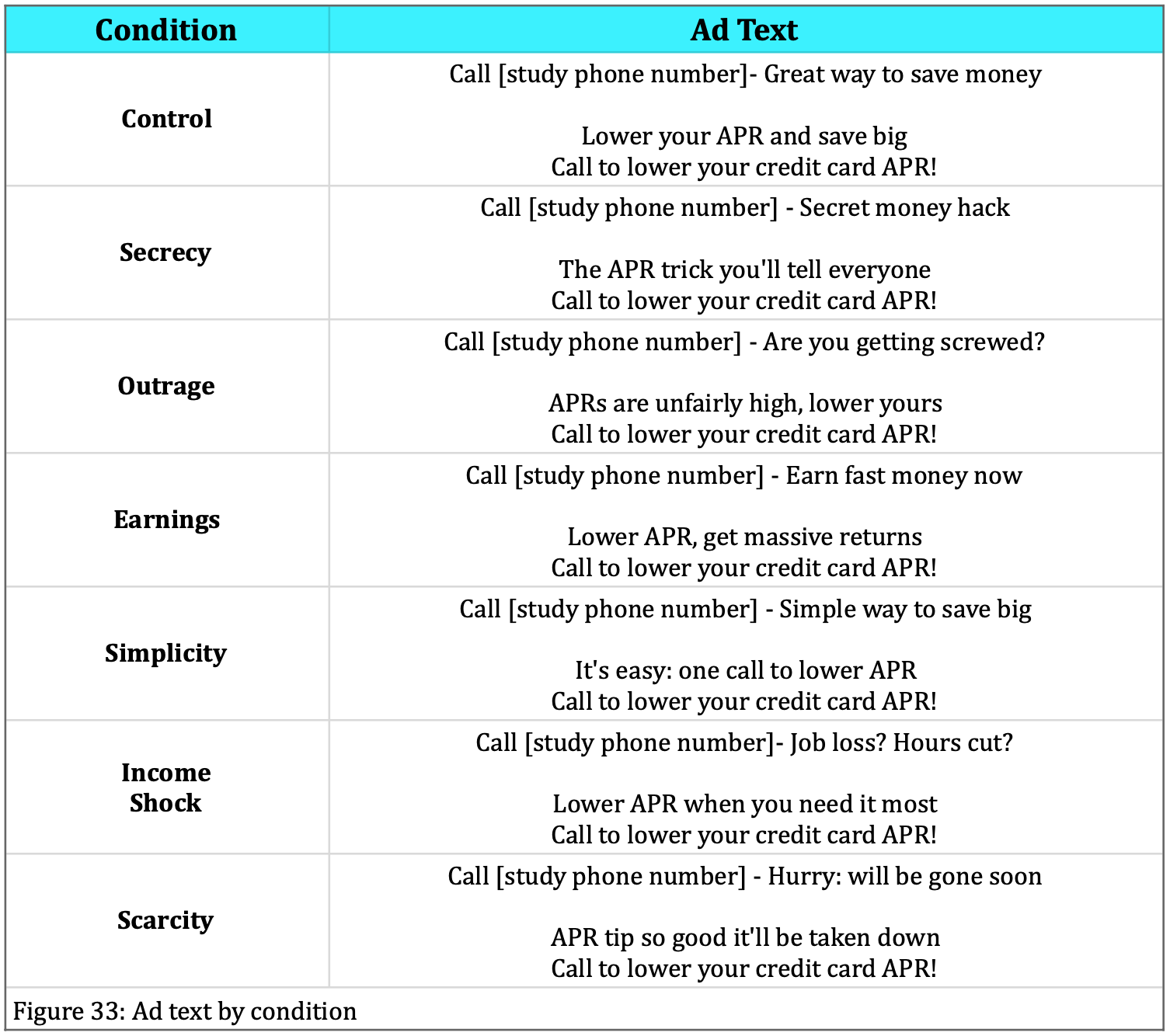 From our experiment, we found the most motivating messaging, by far, was the message that shrouded the action of calling in some mystery.

In this condition of our experiment, the ad message reframed the task of calling a phone number to lower your credit card APR as a “Secret money hack” and “The APR trick you’ll tell everyone.” Alternative wording used to create the idea of secrecy performed similarly well in other tests, solidifying the conclusion that it was the principle of mystery and secrecy that drove the effect, rather than the specific language used to convey the concept.

This condition increased call rates from 3.8% in our control to 5.22%. All of the other conditions were not statistically different from the control condition. 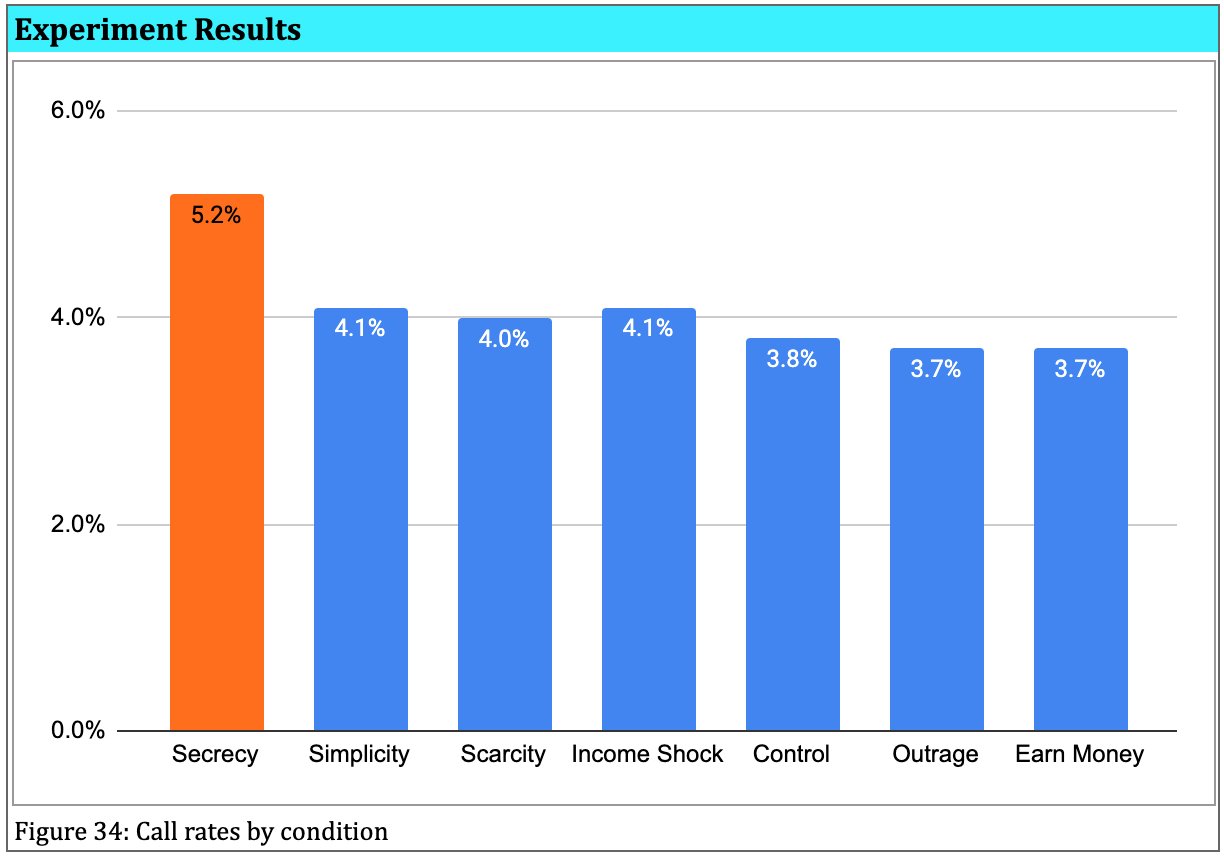 We dispensed almost five hours of one-on-one financial advice to 955 different people in this experiment just by directing them to an automated voicemail. It was amazing to see that such a high percentage of people listened to so much of the message, instead of immediately hanging up. A small number of individuals also called the same number back and listened to the message multiple times!

These learnings can be scaled across multiple domains that still require people to take an action like making a phone call, such as making changes to credit reports or cancelling subscriptions. In addition, we are leveraging this work with our partnership with LendStreet, a debt settlement company. Many of LendStreet’s borrowers who still have outstanding credit card debt after their debt settlement would greatly benefit from this tool.