How can we design ways to better help people connect?

We designed conversational prompts and did two large scale field studies to test if they worked (they did!)

We discovered that groups with the conversational cards discussed more topics (on average three more topics) compared to the other groups, and they also discussed themes that are generally considered deeper, like one’s childhood, relationships, plans for the future, or religion. 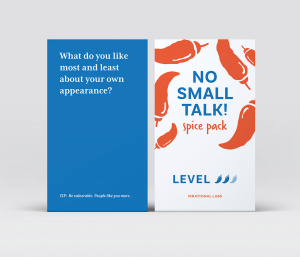 Mutual disclosure had an intended effect on bonding. On average, people talked to 1.6 more new people and had a higher likelihood of wanting to hang out afterwards in the conversational prompt conditions than in the control condition. Offering a script and setting up a norm for deeper conversation fostered new connections.

What we have on our hands is not a loneliness epidemic but a friendship epidemic. To fix it, we need to figure out how to help people make (and sustain) quality friendships before they become lonely.

While there are many possible ways to encourage friendships, we know at least one path that can help: Having deeper conversations.

Our findings? Instead of allowing people to fall back on the lowest common denominator of conversation, we changed the norms and steered them away from small talk by giving them topics to talk about. Doing this took pressure off the individual, putting the hard task of being vulnerable on the shared social infrastructure, and with it, they also got a high return of social dividends. Read the full study.

We should strive for a world with communities, schools, bars, and neighbors that are designed from the ground up to make it easy and enjoyable to connect. Ideally, the individual never has to feel like they are taking a social risk, and instead, they can follow the pre-existing conversational norm. 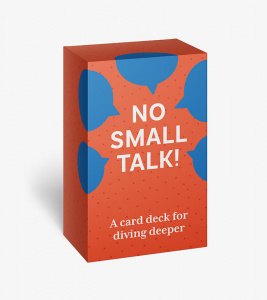