Tough Conversations: How to Use Behavioral Science To Talk With Family & Friends About Sensitive Topics

The holidays are here again, and so are tough conversations with loved ones. How to handle them? Whether the subject is climate change, reproductive rights, or midterm election results, big issues cause big rifts. And we disagree—intensely. 57 percent of families in an American Addiction Centers survey reported that their family gatherings involved drunken arguments—and almost a third said that political differences were the cause.

Navigating these conflicts can feel impossible. So we tiptoe around the landmines and try to steer clear of controversy—until it all blows up in our faces, along with the conversation.

But what if instead, we embraced these conversations as a way of connecting us across differences? Imagine Thanksgiving as a microcosm and those dreaded debates as opportunities to heal divides. Could behavioral science help us change others’ minds and open our own?

Why Tough Conversations Break Down

We’re convinced that it can–and that your Thanksgiving dinner will be more enjoyable as a result. But for behavioral science to become our conversational superpower, we first have to understand a few key details about the human mind.

Our minds resist change for good reason: to preserve the sense of identity that’s so important to our safety. When we encounter evidence that counters or even disproves our beliefs, we instinctively resist. Unfortunately, even if the counter-evidence is strong, resisting it strengthens our false beliefs.

Why? For starters, we seek out information that affirms our current beliefs (confirmation bias). At the same time, we don’t like information that contradicts our behavior (cognitive dissonance) and are overconfident that we’re right.

Sadly, we’re also blind to the holes in our own arguments even when we see the flaws in others’. A study showed this by getting people to see their own arguments as if they came from someone else. Interestingly, doing so made people engage more thoughtfully with their own reasoning and increased the likelihood that they would change their minds.

Part of the art of conversation is anticipating its direction. But in predicting our conversation partner’s next argument, we overlook how often we misread them. Behavioral science has a term for this: conversational forecasting error.

The list of things we get wrong is long. For example, we falsely polarize others by exaggerating how different their views are from ours. When researchers asked Democrats and Republicans to predict how much they would disagree on certain policies, both sides expected the worst. In reality? Democrats and Republicans agree more than you’d think. We also consistently underestimate people’s openness to learn about opposing views. Behavioral science can help us be more optimistic about what we have in common.

4 Ways Tough Conversations Go Wrong—And How to Fix Them

We want our dinners to be amiable—to connect with loved ones without sowing discord. That’s easier said than done, but these tips from behavioral science can get you closer.

In his book How Minds Change, David McRaney recalls a tough conversation that spiraled into a pointless debate. After reaching his breaking point, McRaney had said: ‘I love you, and I’m just worried that you are being misled.’ This ended the debate and opened the door to a more fruitful discussion. The difference: the author had made his intentions known.

Conversely, don’t assume you know their intentions either. Asking people for their reasons and justifications for believing in something can lead into an endless conspiratorial spiral whereas asking people to reflect on their motivations behind their belief can open minds.

Facts alone don’t change minds. But when our social context changes, a window of opportunity opens. That’s because we form our beliefs while being socialized in a particular context. So opposing views feel like an attack on our identity. Changing the social context softens that threat—and we become more open to alternative viewpoints. 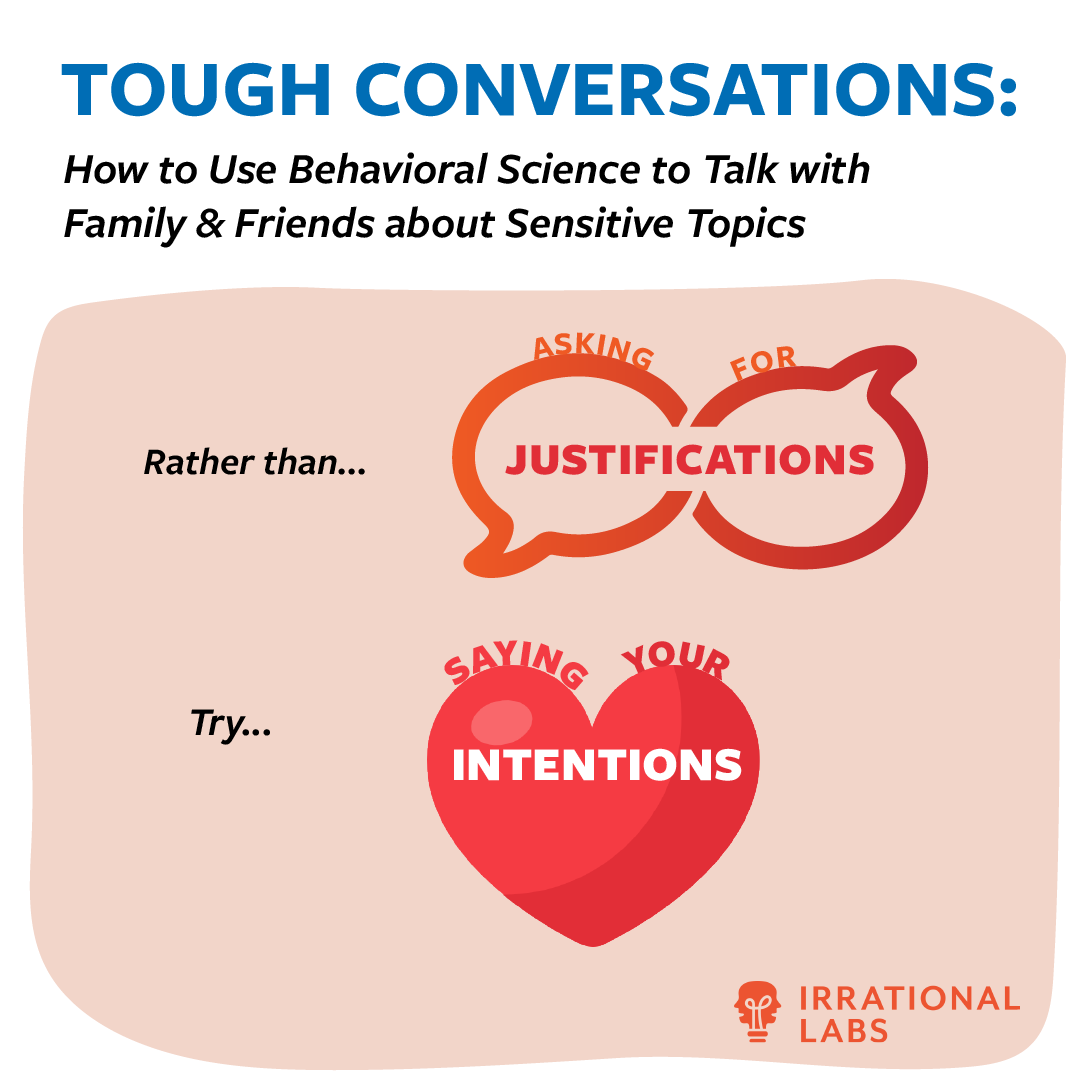 Feeling heard and being heard are not the same. When we feel heard, we’re more trusting of what others say and more open to opposing views. Crucially, we’re also more willing to reciprocate non-judgmental, empathetic listening.

This doesn’t always succeed in making the other person feel heard. Well-meaning nods or repeated ‘uh huhs’ may be mistaken for zoning out, faking, or dismissal. How, then, do we show that we’re listening? Behavioral science offers a simple, but powerful technique: paraphrasing your partner’s words back to them.

This serves two purposes. First, repeating in your own words what you’ve heard helps you better understand what’s been said and lets the other person correct misunderstandings. Second, research suggests that it’s the most effective way to make others feel heard, because it can’t be faked.

There’s more. Another way to indicate receptivity in conversation is to allow space for silence. This may seem counterintuitive—our urge to fill awkward silences often drives us to say things we don’t mean, or that are meaningless. But for minds to open, they need silence to think and digest. Silences may come off as inattention or a shutdown. To ensure that silences are seen instead as signs of healthy engagement, embrace and describe them. Say: ‘I just need a moment to reflect on what you said.’

Interventions don’t get simpler than this. People often fail to predict the efficacy of simple reminders. For example, reminding people to be more receptive to others’ increased receptiveness. 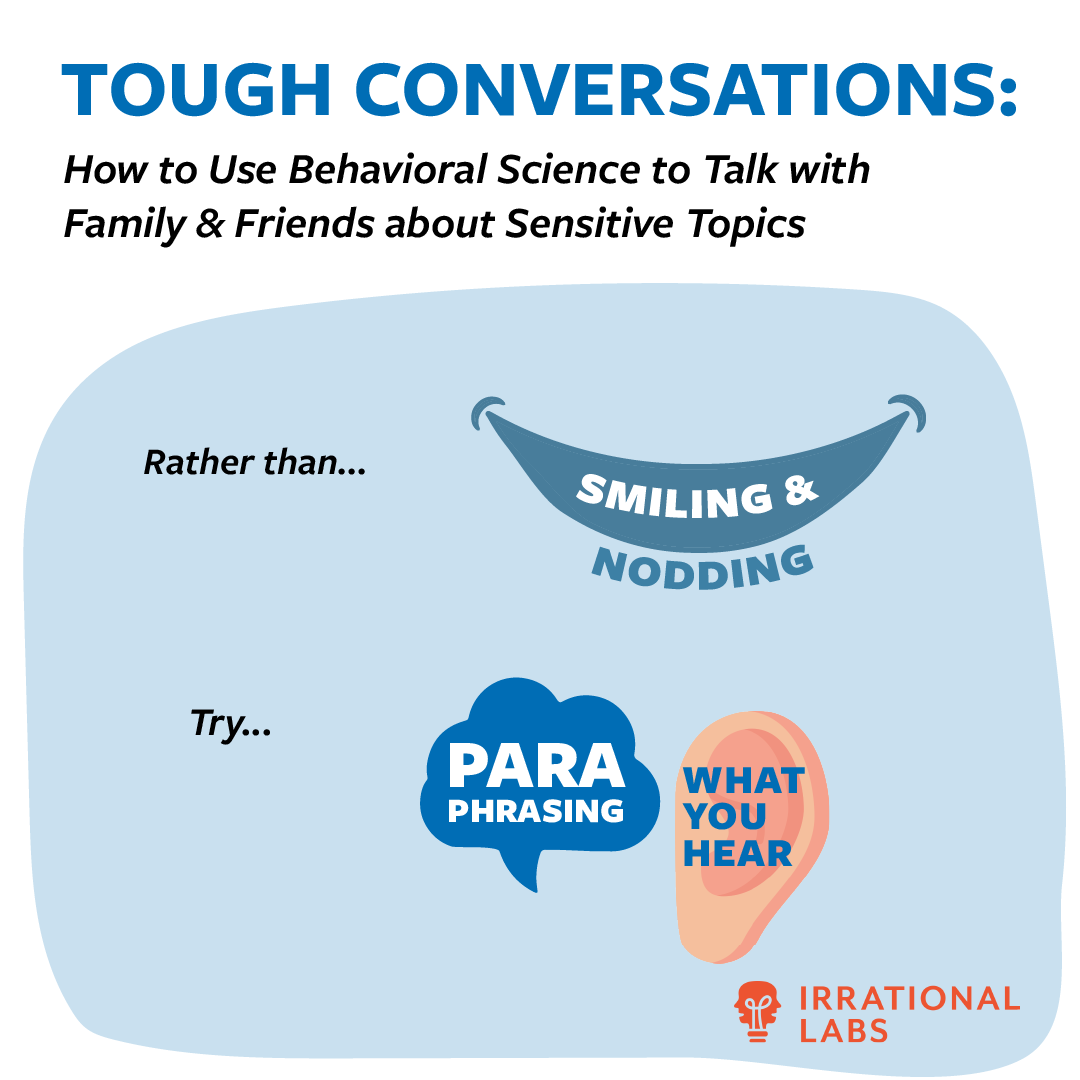 Want to make some examine their beliefs? Ask them to explain them.

Want to test this? The next time you exit a conversation, reflect on how many questions you asked and how you asked them. Did you really want answers, or were you just out to prove your point? Rhetorical and yes/no questions do not necessarily make for enjoyable and productive conversation. Instead, try asking follow-up questions:

Another quirk of the human mind: we tend to think we understand complex systems. We think we know how a helicopter or our toaster works, we think we understand policies we support. Convincing us otherwise is difficult, but asking people themselves to explain how something works can be more effective. For example, people are more likely to doubt a policy they support when asked how it works:

Pro tip: Be curious, not defensive! 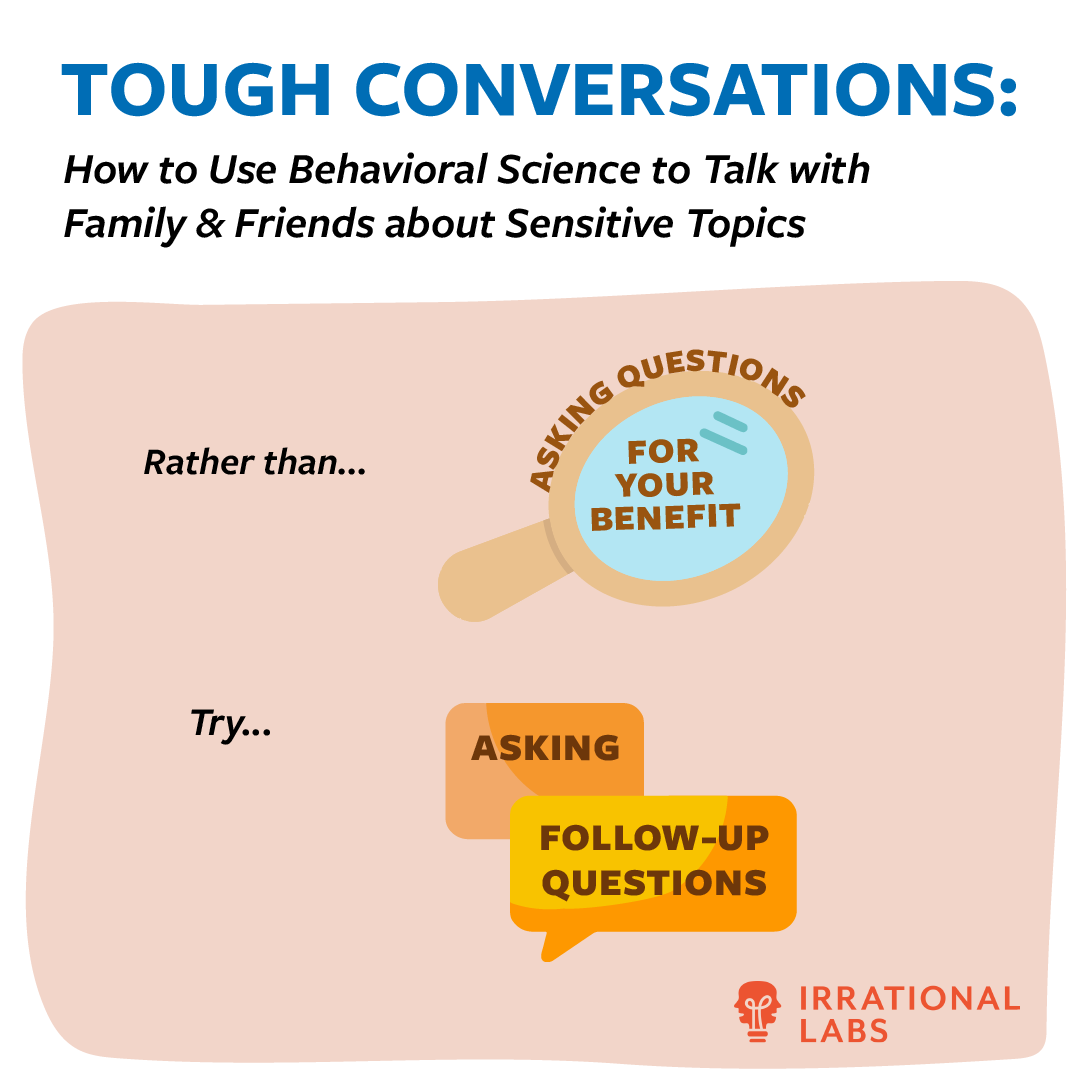 Do you have a sense of what your family and loved ones like to talk about? We think we get better at predicting others’ enjoyment of different conversation topics over time, but research disproves this. We tend to interpret politeness and mirroring questions as enjoyment, but underestimate signals like introducing a new topic or calling back a past topic. Algorithms are better at predicting what our loved ones like to talk about than we are!

How do we fix this? We recommend switching between a variety of topics. Research finds that both switching and variety increases enjoyment in conversation. To do this successfully, behavioral science tells us that we all should prepare some topics ahead of time. You might suspect that having to prepare for a conversation would make it less enjoyable. Actually, a little prep goes a long way—to add enjoyment, reduce anxiety, and build confidence.

Want to dig deeper into how adding structure to socializing can take the edge off tough conversations and make social interaction more rewarding? Priya Parker’s The Art of Gathering or Irrational Labs’ No Small Talk cards are good starting points. 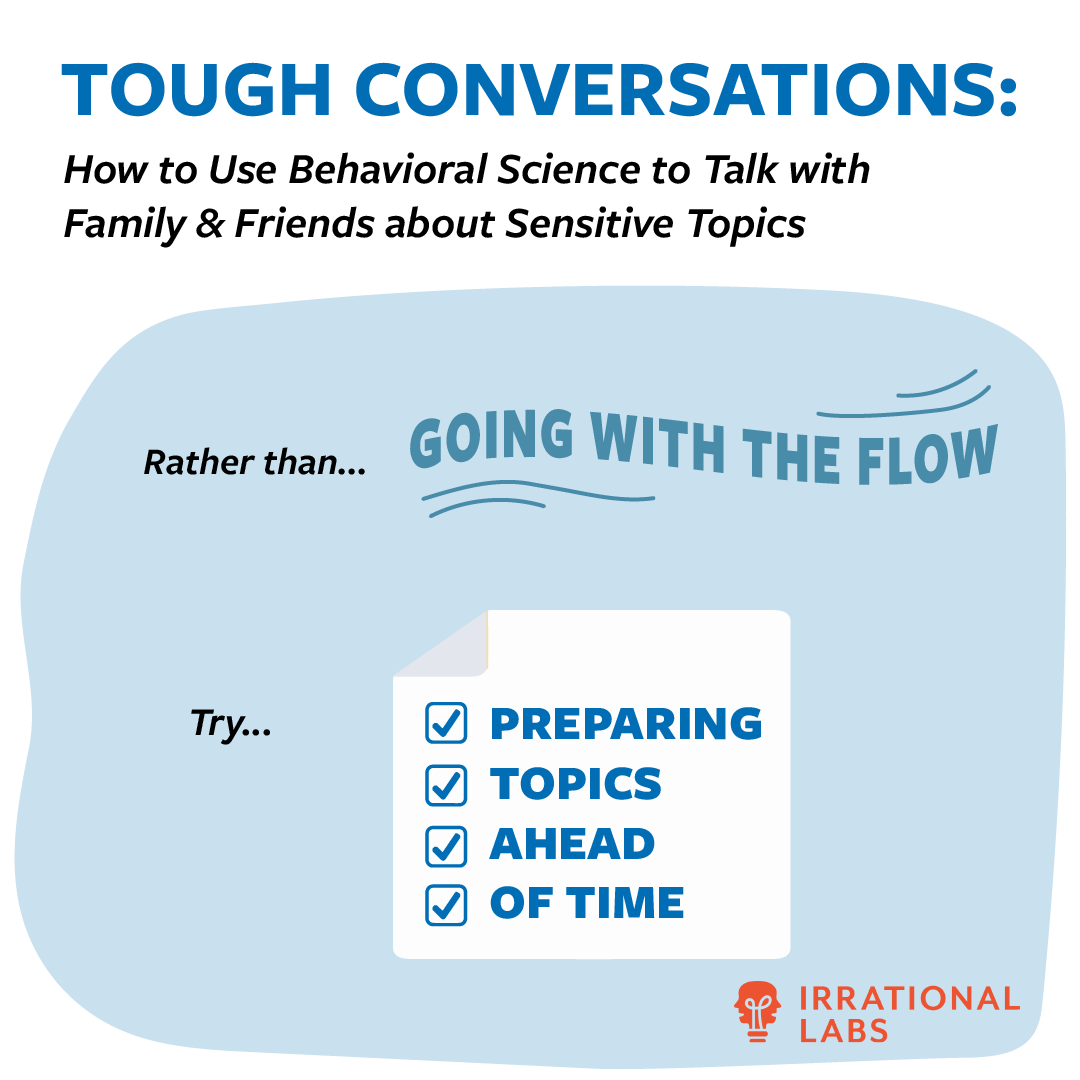 To sum up: you don’t have to shy away from tough conversations with behavioral science on your side. Most saliently, if you want to get more out of your next holiday gathering, forget about changing minds and try listening instead. You’ll change more minds in the process—yours included.