Connecting with Your Future Self: Can Understanding Psychology Help Us Age Gracefully?

I just celebrated my 33rd birthday this Saturday. It was a familiar birthday scene, being surrounded by close friends at a nice restaurant. It did make me think back to a recent conference I went to, at which Hal Hershfield spoke on the notion of the ‘future self.’

During his talk, Hershfield asked us to take a moment to imagine our birthday a year from now. Most people imagine a scenario similar to mine on Saturday; they are celebrating with close friends & family. Now, do the same, but think of your birthday 30+ years from now instead. What do you see? For most people, this is harder to imagine. For one thing, the imagery is less vivid. And perhaps more importantly, they see the scenario from the third person.

Why? Because in many ways, we are disconnected from our future self. We see it as ‘other’ rather than ‘self.’

OK, So Who Cares?

Well, the greater connection we feel toward our future selves, the better actions we take now especially for things that impact the long run (e.g. health, savings). Specifically, Hershfield ran one experiment in which people looked at either an age-adjusted image of themselves or a current image of themselves in a virtual reality experience. They then had to say what they would do with an immediate gift of $1,000. The group that saw the age-adjusted image of themselves allocated twice the amount to a retirement account as the other group! He replicated several versions of this experiment in different contexts, with similar results.

The implications of this research are powerful, both in terms of direct application (financial advisors, financial software tools, or other financial services) or extended application (health-related activities such as quitting smoking or eating healthier). It’s great that something as simple as a digitally altered image could have such a profound effect. If you want to try it, here is a website that will do it for you.

In the spirit of truly seeing my future self as myself, I added a small twist. What if I could look in a mirror? Not a virtual reality scenario, as with Hershfield’s research, mind you — I mean a real mirror? I popped on Craigslist to hire a makeup artist, and found makeup student Marjorie Perry. My photographer friend Paula Majid came over to shoot the process.

How Did My Future Self Look?

Here are the results. First, below is a photo of me, age 33:

Compare this with my ‘future self’ below, with aging makeup (age 63+): 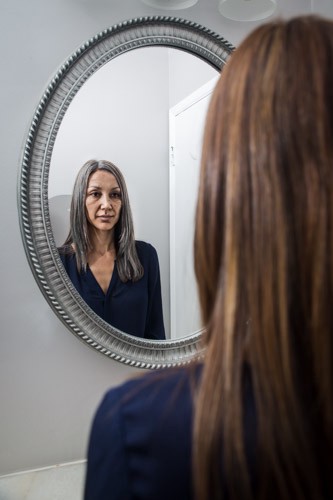 I won’t lie; I was rather shocked to see the result. There was something disconcerting about looking into the mirror and seeing an image so different from the one I usually see. I am really glad to have done it though, as there was no doubt that the reflection I saw was me.

Beyond this little exercise, one thing bugs me about this research about our future self. Most of us are disconnected from our future selves. We see this future self as someone different from our current self. Hershfield clearly demonstrated this in his research. At the same time, other research has shown that we experience an ‘end of history illusion.’ At any given point in time, we believe we have finally become the person we will be for the rest of our lives.

Gilbert, Jordi, Quoidbach, and Wilson discovered that even though people acknowledged how much they changed in the last decade, they don’t think they’ll continue to do so. At 33, I realize I’ve changed a lot since 23. That said, I believe that I won’t change much between now and 43 (though research shows I will).

Wrapping Up: Bridging the Disconnect Between Current Self and Future Self

So combining these two ideas is what has me wondering: If we think we are our final selves right now (at whatever age we are), how can the disconnect between our current self and our future self be so great? In other words, if I think that my personality and tastes will be the same (or similar) as when I am 63, why would I see my 63-year-old self as ‘other?’ What’s your take on the psychology of the future self?

Understand your customers' choices and learn how to change their behavior for the better — in our 8-week online Behavioral Design course.
Learn More
Recommended Posts
Behavioral Game Design: 7 Lessons from Behavioral Science to Help Change User Behavior
How to Become a Behavioral Scientist